Arbin Instruments generously decided to let us do a side-by-side comparison of their newest line of battery testers, the LBT series, with their traditional BT-2000 series test systems. This new generation of testers, along with the new HPTCE series (capable of meaningful high-precision coulomb counting), are the result of Arbin’s collaboration with Ford Motor Company and Sandia National Lab through the Department of Energy’s ARPA-E program.

We compared our traditional Arbin Instruments BT-2000 series test system directly with the LBT series through a rate capability study run using our recommended cycling procedures, which were developed to maximize what you can learn from your battery tests (check out our cycling procedure blog post here).

A rate capability study is a common testing procedure that examines the performance of a battery at a variety of discharge rates that can be expected in application. The study is used to explore the potential (V) behavior and expected capacity (mAh) at each rate.

For these tests we studied LG 18650 HG2 Lithium Ion Batteries that are rated for 3000 mAh, and tested them at four rates: C/5, C/2, 1C and 5C/3 (where C is the discharge rate that will fully deplete the battery in one hour). The following plot shows the results of a rate capability study performed on the new Arbin Instruments LBT-2108-4. (Note: All plots in this blog post were generated using Voltaiq software.) 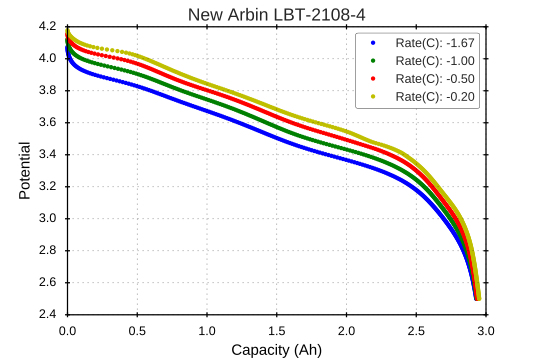 The above plot shows the potential versus discharge capability for the LG battery. These results look similar to what you might expect from any standard battery testing system. However, the benefits of the new higher resolution, lower noise equipment are revealed through more complex analysis like differential capacity (check out our dQ/dV blog post here). The following plot shows the differential capacity curves (dQ/dV vs Potential) during discharge, recorded using both the traditional Arbin Instruments BT-2000 series tester and their new LBT-2108-4 tester. 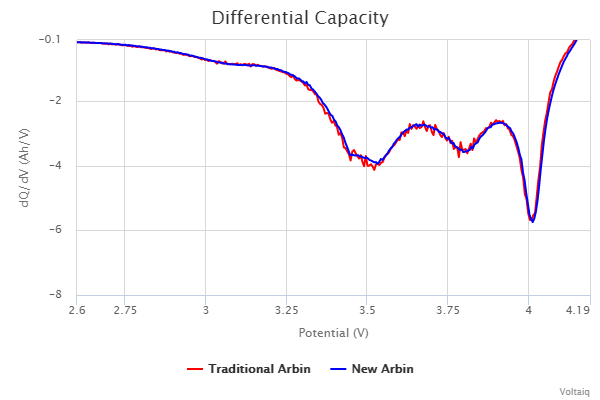 The first thing you’ll notice is that the new Arbin Instruments tester produces a much smoother curve (blue), while the traditional tester's data trace (red) jumps around quite a bit. More importantly, the real value of the smoother curve is that we can now extract much more precise features from the data, and can even see new features that weren’t apparent before. In the following plot, we can now see that the peak located around 3.5 V (as measured by the new LBT series) is in fact two separate peaks rather than just one single peak. Previously, achieving such smooth curves would require significant data averaging, which unfortunately often leads to features being ‘smoothed’ away. 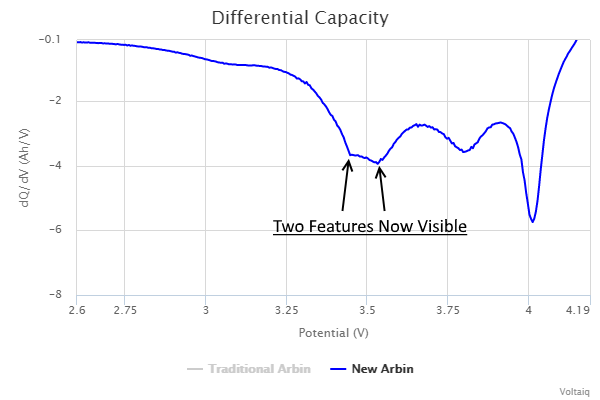 Improving your ability to detect and track these key features of battery performance can help you to qualify batteries more accurately, and to develop better models for their performance over time.

At Voltaiq we’re excited to see the industry developing equipment with higher precision measurement accuracy that will help the scientists and engineers developing our new battery products learn more from their data.